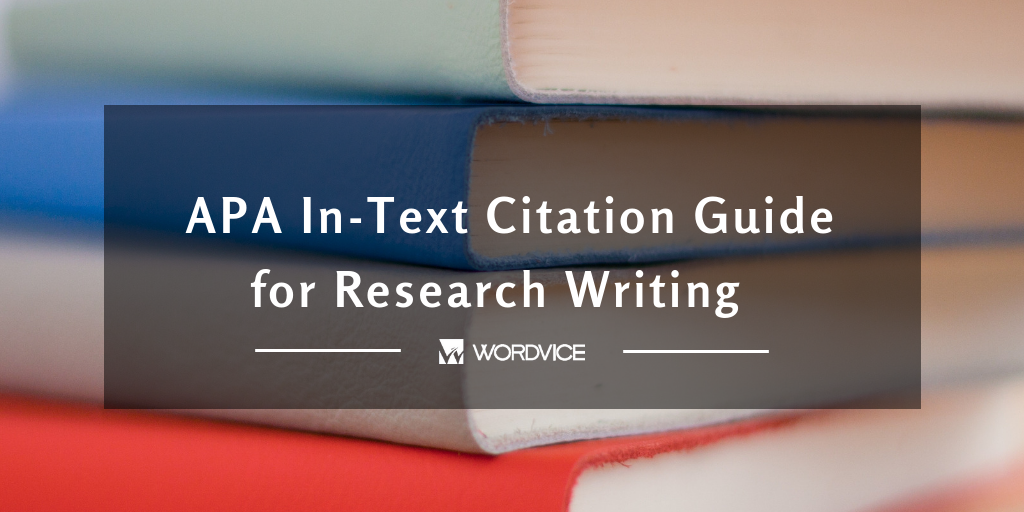 Why Use In-Text Citation?

When writing a journal article, literature review, convention paper, or any other academic document, authors must include in-text citations whenever they refer to, summarize, paraphrase, or quote from another source. In addition, every time a wok is cited within a paper (in APA, a parenthetical citation), a corresponding entry must be included in the reference list.

APA (American Psychological Association) is the style the formatting style most used to cite sources within the social sciences and in several other academic disciplines. In research papers, in-text citations are most commonly used in the Introduction and Results sections. The following guidelines and examples are taken from the APA Publication Manual, 6th edition, 2nd printing, which details rules and application of APA style in research papers, including in-text citations, endnotes/footnotes, and references. For more information, consult the APA Style Manual website.

This resource provides detailed guidelines for citing sources in your paper and includes examples of in-text citation for reference by research authors.

When using APA format, follow the “author-date” method of in-text citation. Write the author’s last name and publication year for the source in parentheses and separate this information with a comma.

When referring to external work or referencing an entire work but not directly quoting the material, you only need to make reference to the author and year of publication and not the page number in your citation.

If you have referred to the author of the work in the sentence or earlier in the paragraph, you only need to include the year of publication in the citation.

Verb tense used in referring to other works

APA style requires authors to use past tense or present perfect tense (NOT present tense) when using signal phrases to refer to or discuss previous research.

Placement of in-text citation in the sentence (no quotation)

When referring to a specific work or works, place the citation (publication date only) directly after the author of the study referenced.

Klinge and Rogers (2010) found that mirroring is instrumental in developments of performative gender roles.

When giving information that reflects the results or implications of previous work, place the citation (author and publication date) at the end of the sentence.

Mirroring has been found to be instrumental in the development of performative gender roles (Klinge and Rogers, 2010).

When quoting directly from a work, include the author, publication year, and page number of the reference (preceded by “p.”).

Method 1: Introduce the quotation with a signal phrase that includes the author’s last name; the publication year will follow in parentheses. Include the page number in parentheses at the end of the quoted text. Note that the quotation marks surround the text only, and not the parenthetical citation.

According to Khan (1976), “Graduate students tend to apply more diverse methods during their first two years of research” (p. 45).

Khan (1976) noted that “graduate students tend to apply more diverse methods during their first two years of research” (p. 45), a fact that has profound implications for research departments.

Method 2: If the author is absent in the signal phrase, include the author’s last name, the publication year, and the page number together in parentheses after the quoted text.

Researchers noted that “graduate students tend to apply more diverse methods during their first two years of research” (Khan, 1976, p. 45), but they did not offer a suggestion as to the cause.

Long direct quotations are those with at least 40 words of quoted text in a row. Long quotes should be placed in a separate block of lines without quotation marks, similar to creating a new paragraph. Begin the quotation on a new line and indent 0.5in/1.27cm from the left margin. Type the entire quotation within these new margins and using double-spacing. Include the parenthetical citation after the final punctuation mark.

Graduate students tend to apply more diverse methods during their first two years of research, especially when conducting research in teams of three or fewer with no senior researchers  present. This tendency could be attributed to either a misunderstanding of correct methodology or to a feeling of freedom to explore different approaches that the researchers have yet to employ. (p. 45)

Summarizing and Paraphrasing Other Works

When paraphrasing the ideas of another work, you only need to cite the author and year of publication in your in-text citation. It may be a good idea to include the page number as well if the paraphrased information is located on a specific page of the original text. APA guidelines encourage this inclusion but do not require it.

According to Khan (1976), new researchers tend to use more diverse methodologies.

When making an in-text citation of works by multiple authors, there are specific rules to follow depending on the number of authors of a work and the number of times you have cited these works.

When citing more than one source in the same in-text citation, write the in-text citations in the standard way and separate them with a semi-colon. List the sources alphabetically (by author’s last name or by title if no author is given) in the order they appear in the References.

Citing Works by the Same Author with the Same Publication Year

The incidence of West Nile virus in Florida increased between 2002 and 2004 (Dickens, 2014a). According to Dickens (2014b), “these viral infections were precipitated by record levels of rainfall around the peninsula” (p. 150).

Citing a Work Quoted in another Source

Work quoted or paraphrased in another text is called a “secondary source.” While in your References you must cite the primary source as well, in your in-text citation you will add the words “as cited in” followed by the secondary source. For example, if the Franklin review article you are citing includes a useful quote by Adams that supports your paper, your in-text citation would look like this:

When citing an entire website (with no specific webpage or article given), simply provide the title and web address within the text of your paper. No citation is needed in the References.

A webpage with an individual author or authors should be cited in the same way as other texts, with the name or names written first, followed by the publication year.

Webpage with a group author

Treat group authors as individual authors in in-text citations, but instead of the author’s last name, include the name of the group.

Claustrophobia afflicts one in five Britons (The Surrey Group, 2003).

Even when some central information is missing from a website (e.g., no author, date, or webpage title), you may still cite it as a source if you use the correct formatting. For information on how to cite a website with missing information, visit the APA Style Blog post on Missing Pieces.

For a more comprehensive explanation of social media citations guidelines, visit the APA Style Blog post on How to Cite Social Media in APA Style.

And when submitting your finished AP document to journals or for a class assignment, be sure to get academic editing and proofreading. Professional editors with experience in APA, AMA, MLA, and other popular style guides will make sure that your document’s citations and references conform to the journal of your choice.

“How to Write a Research Paper Introduction”

“Writing the Results Section of a Research Paper”

“Which Verb Tenses to Use in a Research Paper”

“How to Write an Abstract for a Research Paper”

“How to Write a Research Paper Title”

“100+ Verbs That Will Make Your Research Writing Amazing”

“Tips for Paraphrasing in Research Papers”