Home Where Does the Research Question Go in a Paper?
Academic
Resources

Where Does the Research Question Go in a Paper?

Silke Haidekker has a PhD in Pharmacology from the University of Hannover. She is a Clinical Research Associate in multiple pharmaceutical companies in Germany and the USA. She now works as a full-time medical translator and writer in a small town in Georgia. 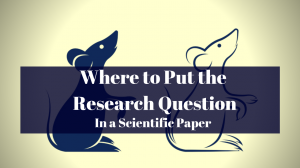 Of Rats and Panic Attacks: A Doctoral Student’s Tale

You would probably agree that the time spent writing your PhD dissertation or thesis is not only a time of taking pride or even joy in what you do, but also a time riddled with panic attacks of different varieties and lengths. When I worked on my PhD thesis in pharmacology in Germany many years back, I had my first panic attack as I first learned how to kill rats for my experiments with a very ugly tool called a guillotine! After that part of the procedure, I was to remove and mash their livers, spike them with Ciclosporin A (an immunosuppressive agent), and then present the metabolites by high-pressure liquid chromatography.

Many rats later, I had another serious panic attack. It occurred at the moment my doctoral adviser told me to write my first research paper on the Ciclosporin A metabolites I had detected in hundreds of slimy mashes of rat liver. Sadly, this second panic attack led to a third one that was caused by living in the pre-internet era, when it was not as easy to access information about how to write research papers.

How I got over writing my first research paper is now ancient history. But it was only years later, living in the USA and finally being immersed in the language of most scientific research papers, that my interest in the art of writing “good” research papers was sparked during conferences held by the American Medical Writers Association, as well as by getting involved in different writing programs and academic self-study courses.

“So what does writing a “strong” research paper entail? “

a) what is known or believed about the topic;

b) what is still unknown (or problematic)

c) what the question or hypothesis of your investigation is.

Some medical writers refer to this organization structure of the Introduction as a “funnel shape” because it starts broadly, with the bigger picture, and then follows one scientifically logical step after the other, until finally narrowing down the story to the focal point of your research at the end of the funnel.

Let’s now look in greater detail at how the research question is logically embedded into the Introduction to make it a powerful focal point and ignite the reader’s interest to the importance of your research:

You should start by giving your reader a brief overview of knowledge or previous studies already performed in the context of your research topic.

The topic of one of my research papers was “investigating the value of diabetes as an independent predictor of death in people with end-stage renal disease (ESRD).” So in the Introduction, I first presented the basic knowledge that diabetes is the leading cause of end-stage renal disease (ESRD) and thus made the reader better understand our interest in this specific study population. I then presented previous studies already showing that diabetes indeed seems to represent an independent risk factor for death in the general population. However, very few studies had been performed in the ESRD population and those only yielded controversial results.

Example: “It seems well established that there is a link between diabetic nephropathy and hypertensive nephropathy and end-stage renal disease (ESRD) in Western countries. In 2014, 73% of patients in US hospitals had comorbid ESRD and type 2 diabetes (1, 2, 3)…”

In our example, this “controversy” flags the “unknown” or “problematic” and therefore provides strong reasons why further research is justified. The unknown should be clearly stated or implied by using phrases such as “were controversial” (as in our example), “…has not been determined,” or “…is unclear.” By clear stating what is “Unknown,” you indicate that your research is new and this creates a smooth transition into your research question.

Example: “However, previous studies have failed to isolate diabetes as an independent factor, and thus much remains unknown about specific risk factors associated with both diabetes and ESRD.”

Your research question is the question that inevitably evolves from the deficits or problems revealed in the “Unknown” and clearly states the goal of your research. It is important to describe your research question in just one or two short sentences, but very precisely and including all variables studied, if applicable. A transition should be used to mark the transition from the Unknown to the research question using one word such as “Therefore” or “Accordingly,” or short phrases like “For this reason” or “Considering this lack of crucial information.”

In our example, we stated the research question as follows:

Example: “Therefore, the primary goal of our study was to perform a Kaplan-Meier survival study and to investigate, by means of the Cox proportional hazard model, the value of diabetes as an independent predictor of death in diabetic patients with ESRD.”

Example: “To test the hypothesis that diabetes is an independent predictor of death in people with ESRD, we performed a Kaplan-Survival study and investigated the value of diabetes by means of the Cox proportional hazard model.”

Note that this sentence leads with an introductory clause that indicates the hypothesis itself, transitioning well into a synopsis of the approach in the second half of the sentence.

The generic framework of the Introduction can be modified to include, for example, two research questions instead of just one. In such a case, both questions must follow inevitably from the previous statements, meaning that the background information leading to the second question cannot be omitted. Otherwise, the Introduction will get confusing, with the reader not knowing where that question comes from.

Begin with your purpose in mind.

To conclude, here is my simple but most important advice for you as a researcher about to write a scientific paper (or just the Introduction of a research paper) for the first time: Think your research question through precisely before trying to write it down; have in mind the reasons for exactly why you wanted to do this specific research, what exactly you wanted to find out, and how (by which methods) you did your investigation. If you have the answers to these questions in mind before starting the paper, the actual writing process will be a piece of cake and you will finish it “like a rat up a drainpipe”! And hopefully with no panic attacks.

Before submitting your master’s thesis or PhD dissertation to academic journals for publication, be sure to get professional proofreading and editing services to ensure that your writing is error free. Impress your journal editor and get into the academic journal of your choice.