When to Use Commas, Colons, Semicolons, and Dashes 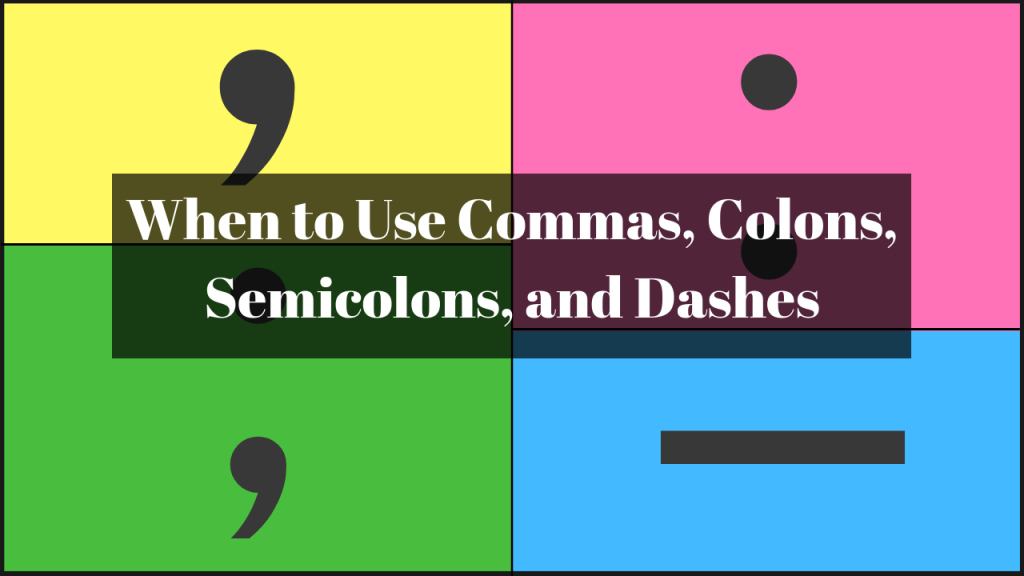 Which Punctuation Mark Should I Use?

Knowing which punctuation to apply within sentences can be confusing. But rules are important and made to be followed, especially in academic writing. Putting a comma between two independent clauses will confuse your readers and make your work frustrating to read. On the other hand, a well-placed semi-colon can add nuance and subtlety to any kind of writing. Keep the following rules in mind when choosing to use a comma (,), colon (:), semicolon (;), or dash (—).

When to Use a Comma

Commas are the most frequently used (and abused) punctuation mark in most kinds of writing. The reason for this is that they have so many uses and so many rules—it can be hard to keep track of them all. Let’s take a look at just a few of the comma’s crucial functions and discuss when to choose a comma over another similar punctuation mark.

I bought bread, cheese, and pickles at the grocery store.

To separate long independent clauses when conjunctions connect them:

Astronomers have known about the positions of stars for centuries, but they didn’t understand that the earth revolves around the sun.

After an introductory phrase:

In preparation for the next convention, the representatives studied up on the most important issues.

To separate a parenthetical phrase or interrupter:

All doctors, if they care about their patients, are concerned with good office hygiene.

Comma splice. Do NOT use a comma to divide two independent clauses without a conjunction.

Incorrect: Thousands of protesters showed up on the streets, they were shouting and carrying large posters.

Correct: Thousands of protesters showed up on the streets; they were shouting and carrying large posters.

Combining lengthy phrases. Using commas with compound sentences or to separate clauses with other commas can cause confusion. Use a semicolon.

Incorrect: Some useful subjects are English, which is an international language, math, which is used in all domains of sciences and social sciences, and philosophy, which underpins many other areas of study.

Correct: Some useful subjects are English, which is an international language; math, which is used in all sciences and social sciences; and philosophy, which underpins many other areas of study.

When to Use a Colon

A colon is used to make lists and tell the reader, “This is what I mean.” The colon should not be used often in most kinds of writing unless there are extensive lists involved. The rules of the colon are strict but fairly easy to remember.

To introduce an item or series of items:

To separate independent clauses when the second clause/sentence illustrates, explains, paraphrases, or expands on the first:

Martha realized that her worst fear was coming true: her son was being sent to war.

*The information after the colon explains Martha’s fear in the form of an independent clause.

To follow the salutation in a business letter or more formal letter:

To the Central Valley Committee Chairman:

Do not capitalize the first word after the colon unless it is a proper noun, is part of a quote, or is the first in a series of sentences:

Incorrect: I have three desires: To eat, sleep, and work.

Correct: I have three desires: to eat, sleep, and work.

When a quotation contains multiple sentences, many writers prefer to introduce it with a colon rather than a comma:

In Chapter 3, the author explains his theory: “Dogs have dreams, but they don’t dream as humans do. Their dreams reflect a primal desire for pleasure, whereas humans are preoccupied with the ego and self-image. This is equally true in wakefulness and sleep.”

A complete sentence after the colon is not necessary—a word or phrase is fine.

There is one mantra that can sum up our position towards climate change: urgent action.

Separating two clauses that have equal rank or unrelated information:

Incorrect: Sarah and her friends loved spending time on the mountain: nature always held a special meaning for them.

Correct: Sarah and her friends loved spending time on the mountain; nature always held a special meaning for them.

(*Use a period if the clauses are not at all related. Use a semi-colon if the information in the second clause is somewhat related but does not illustrate, explain, or paraphrase the first clause.)

The colon is a powerful punctuation mark and should be used sparingly. Think of it as a stop sign that calls readers’ attention and says, “Hey! Pay attention to this. This is important.” If there are too many stop signs on a street, you won’t be able to drive very smoothly or quickly. This is the same effect colons can have upon readers.

Because colons are so attention-grabbing, they can clearly indicate which information is important. For this reason, many authors use colons to introduce their main argument or supporting evidence.

When to Use a Semicolon

A semicolon is used to separate two ideas (two independent clauses) that are closely related. They can also be used when listing complex ideas or phrases that use commas within them.  Essentially, a semicolon is like a comma with more meaning or a colon with more flexibility.

To join two or more ideas (parts) in a sentence when their ideas are given equal position or rank:

The universe has always called to human beings; there could be no more final frontier than space.

Sam thought David was inviting him to the picnic to enjoy a nice day out; as it turned out, David was planning a surprise birthday party.

To present items in a list or series if there are commas within the items, or if the items are relatively long and complex:

Our family members came all the way from Denver, Colorado; Rochester, Minnesota; and even Paris, France.

To connect independent clauses joined by a coordinating conjunction (if the clauses are already punctuated with commas) or if they are lengthy.

My main research objective is to isolate the cause of the disease, as well as to contribute to the existing literature; for this will bring an end to starvation across the continent, create new study designs related to epidemiology, and change the very paradigm of my research field.

Using a Semicolon Instead of a Comma

Incorrect: The specimens were treated properly, however, they were not stored properly.

Correct: The specimens were treated properly; however, they were not stored properly.

Incorrect: The sun is wonderful: it produces light, which plants need to survive, it gives us warmth, which is useful for most life, and it makes a sad day happier, which is obviously a positive trait!

Correct: The sun is wonderful: it produces light, which plants need to survive; it gives us warmth, which is useful for most life; and it makes a sad day happier, which is obviously a positive trait!

*Using only commas, it is unclear what items are being listed exactly. Semicolons help divide listed items that each contain commas.

When to Use a Dash (or Dashes)

The dash (or, more specifically, the “em dash”) is perhaps the most versatile of the punctuation marks. However, like the semicolon, it is underutilized in most kinds of writing. It can function like a comma, parentheses, or colon, but creating subtly different effects in each case.

Use Dashes in Place of a Comma

Em dashes can be used in pairs to replace commas when writing a parenthetical or interruptive phrase. The dashes have a slightly more emphatic feel, making the reader focus on this information that is set inside the special marks.

And so, when the baby was born in June, nearly two months premature, the parents were happy but quite nervous, and they still had to buy all of the baby supplies.

And so, when the baby was born in June—nearly two months premature—the parents were happy but quite nervous, and they still had to buy all of the baby supplies.

(*The dashes put emphasis on the fact that the baby was premature, showing that it is an important detail in this sentence.)

Use Dashes in Place of Parentheses

Put a pair of dashes in the same position that you would put parentheses. Since they are less formal, fewer dashes than parentheses are found in academic writing. However, they do cause more of an obvious interruption and therefore more emphasis. They can also be used as a sort of “meta” parentheses when the content between the dashes already contains parentheses.

When dashes replace parentheses, the surrounded punctuation is omitted:

Parentheses: After taking all of his final exams (including seven essays and three multiple choice tests), David just wanted to sleep.

Dashes: After taking all of his final exams—including seven essays and three multiple choice tests—David just wanted to sleep.

*The dashes are more visible and therefore interrupt the flow of the sentence a bit more and draw attention to the content.

When used instead of parentheses at the end of a sentence, only a single dash is used:

Parentheses: That coffee shop offers a selection of exotic gourmet coffee (or at least that is how they describe it).

Single dash: That coffee shop offers a selection of exotic gourmet coffee—or at least that is how they describe it.

*The dash seems to work especially well when placed at the end of a sentence—it extends the sentence like an addendum.

Use a Dash in Place of a Colon

Use an em dash instead of a colon when you want to emphasize the conclusion of your sentence without giving it all of the connotations that a colon brings. A dash can add “extra” information and is more flexible in this way. It is also less formal than a colon.

Colon: The executives finally decided what they would do with the company: sell it at a loss.

Single Dash: The executives finally decided what they would do with the company—sell it at a loss.

*Using the dash in this way conveys a sense of anticipation (or of inevitability) and can add an almost editorial feel to the writing.

Choose Punctuation with Context and Audience in Mind

As with any technical decisions regarding writing, when choosing which punctuation marks to use and apply consistently, it is a good idea to consider your audience and the context of your work. For instance, researchers looking to publish in journals should read articles from the journals they are targeting to see which punctuation marks are used by most authors in that journal. The same rule applies to any newspaper, magazine, or periodical for which your writing is intended.

Although you hopefully have learned a bit more about how to use these punctuation marks appropriately, receiving editing and proofreading before finalizing your document ensures that your paper is completely free of errors in grammar, punctuation, mechanics, and style issues. Visit our editing pricing page for a full menu of our editing services and rates.

How to Write a Research Paper Title”

Rules for Comma Use (Grammarly)

How to Use the Em Dash (The Punctuation Guide)