Home Can I Use First-Person Pronouns in a Research Paper? Yes!
Academic
Resources

Can I Use First-Person Pronouns in a Research Paper? Yes! 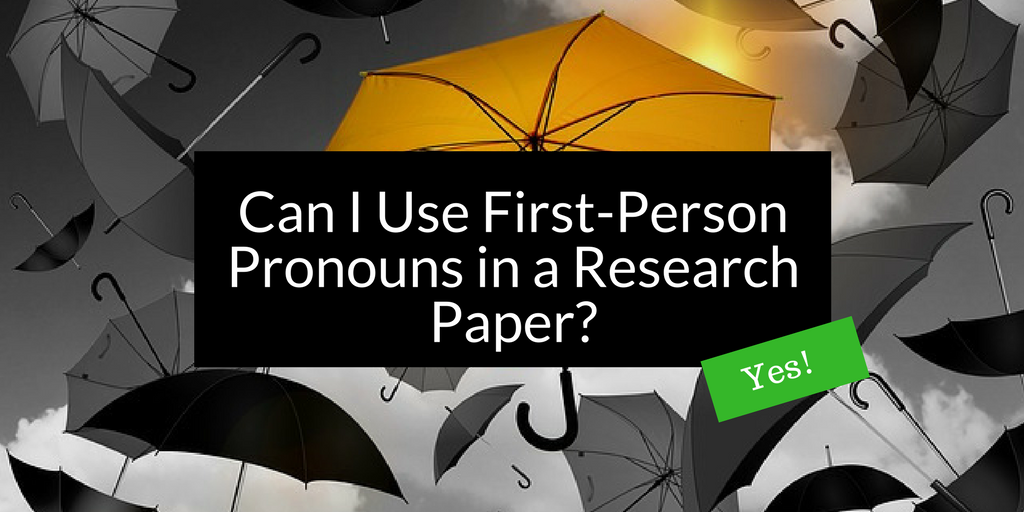 Research writers frequently wonder whether the first person can be used in academic and scientific writing. In truth, for generations, we’ve been discouraged from using “I” and “we” in academic writing simply due to old habits. That’s right—there’s no reason why you can’t use these words! In fact, the academic community used first-person pronouns until the 1920s, when the third person and passive-voice constructions (that is, “boring” writing) were adopted. Recently, however, we’ve shifted back to producing active and engaging prose that incorporates the first person.

However, the use of “I” and “we” still has some generally accepted rules we ought to follow. For example, the first person is more likely used in the abstract, introduction, discussion, and conclusion sections of an academic paper while the third person and passive constructions are found in the methods and results sections.

In this article, we discuss when you should avoid personal pronouns and when they may enhance your writing.

It’s Okay to Use First-Person Pronouns to:

The First Person Should Be Avoided When:

The following examples compare the impact of using and avoiding first-person pronouns.

To understand the effects of global warming on coastal regions, changes in sea levels, storm surge occurrences and precipitation amounts were examined.

[Note: When a long phrase acts as the subject of a passive-voice construction, the sentence becomes difficult to digest. Additionally, since the author(s) conducted the research, it would be clearer to specifically mention them when discussing the focus of a project.]

[Note: When describing the focus of a research project, many authors often replace "we" with phrases such as "this study" or "this paper." "We," however, is acceptable in this context, including for scientific disciplines. In fact, recent papers published in Nature, for example, use "we" to establish an active voice. Be careful when using "this study" or "this paper" with verbs that clearly couldn't have performed the action. For example, "we attempt to demonstrate" works, but "the study attempts to demonstrate" does not; the study is not a person.]

From the various data points we have received, we observed that higher frequencies of runoffs from heavy rainfall have occurred in coastal regions where temperatures have increased by at least 0.9°C.

[Note: Introducing personal pronouns when discussing results raises questions regarding the reproducibility of a study. However, mathematics fields generally tolerate phrases such as "in X example, we see..."]

[Note: We removed the passive voice and maintained objectivity and assertiveness by specifically identifying the cause-and-effect elements as the actor and recipient of the main action verb. Additionally, in this version, the results appear independent of any person's perspective.]

In contrast to the study by Jones et al. (2001), which suggests that milk consumption is safe for adults, the Miller study (2005) revealed the potential hazards of ingesting milk. The authors confirm this latter finding.

[Note: "Authors" in the last sentence above is unclear. Does the term refer to Jones et al., Miller, or the authors of the current paper?]

In contrast to the study by Jones et al. (2001), which suggests that milk consumption is safe for adults, the Miller study (2005) revealed the potential hazards of ingesting milk. We confirm this latter finding.

[Note: By using "we," this sentence clarifies the actor and emphasizes the significance of the recent findings reported in this paper. Indeed, "I" and "we" are acceptable in most scientific fields to compare an author's works with other researchers' publications. The APA encourages using personal pronouns for this context. The social sciences broaden this scope to allow discussion of personal perspectives, irrespective of comparisons to other literature.]

Other Tips about Using Personal Pronouns

Should I Use ‘I’? (UNC-Chapel Hill Writing Center)

Using First Person in an Academic Essay: When is It Okay? (Writing Commons)

Use of First Person in APA Style (APA Style Blog)